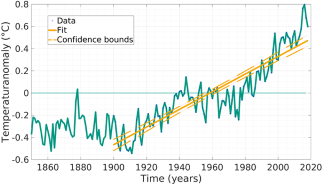 Climate change is the subject of lively debate in the media and among the general public. There are various simulations that predict a global average surface temperature warming of up to four degrees Celsius by 2100.
Such warming would lead to impacts ranging from desertification to sea-level rise, resulting in the disappearance of entire countries. Yet many people ignore climate change or the dramatic consequences of inaction.

Pupils should research the topic of climate change independently, based on data and using objective methods. This should enable them to conduct discussions on the basis of a research-driven perspective and to represent their point of view with the help of scientifically verifiable statements rather than being emotionally charged. The students will learn the basic principles of mathematical modeling and their application in climate mathematics. An overriding goal is to show that mathematics plays an important, but not always directly visible, role in everyday life.

In order to achieve these goals, one-day workshops will be developed for use in extracurricular learning venues as well as material for direct use in class. In addition, pupils who would like to do research in this field in the long term should be supported by appropriate material. In order to test the developed materials, they will be integrated into the offers of the student laboratory for mathematics at KIT and into those of the Simulated Worlds project.

Climate research is a very broad field of research. In addition to basic research on "What is climate change and how can we recognize it", causes and consequences as well as forecasts for the future are often discussed. I limit my research to the following areas, which should be prepared for different age groups as far as possible: